Scum and Villainy Raiding a Settlement Near You

The galaxy’s Most Wanted X Wing craft are sitting in the Seriously Board hangers and waiting for dispatch to prey upon the unwary and ill prepared. Imperials and Rebels alike would be well advised to gun up and raise shields. The four separate Wave 6 expansions for X Wing introduce an entirely new faction, Scum and Villainy, along with three new ship designs. Check them out:

All of our X-Wing Miniatures Game products can be found here.

We are finally beginning to see some stock hitting our shores – long may it continue! 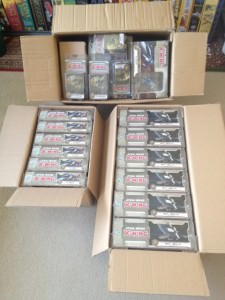