Five of us had a great evening learning and playing this new offering from Formal Ferret Games. Players are TV network owners, whose aim is to build their business from a pretty dire public access channel into the star studded, lucrative, and most watched global network around. The winner is determined by who has garnered the most viewers at the end of five seasons of play. This is a game of resource building, economic management, careful planning, and timing. While the rulebook appears quite lengthy, it really doesn’t need to be, as you discover the rules behave exactly as you would expect in a logical fashion, with no real hooks or curve balls.

All information is open – everybody can see what each other has and can obtain – but the real tension comes in the form of pushing your luck, waiting to be in a position to acquire the next Star, Ad or Show that you want, before somebody else snaffles it and leaves you with less or no options. The theme and satire within the game is really amusing, with lots of tips to current and familiar TV shows, actors, and ads. This was a surprisingly easy game to pick up and rewarding to play, with some real sticky planning and tense “will they take that before I can get it” moments. Not one for absolute beginners, and definitely a game to be enjoyed by those who like to plan and build resources.

The Networks available HERE.
Check out a review HERE.

The Networks features some really nice artwork that gets you straight into the theme. 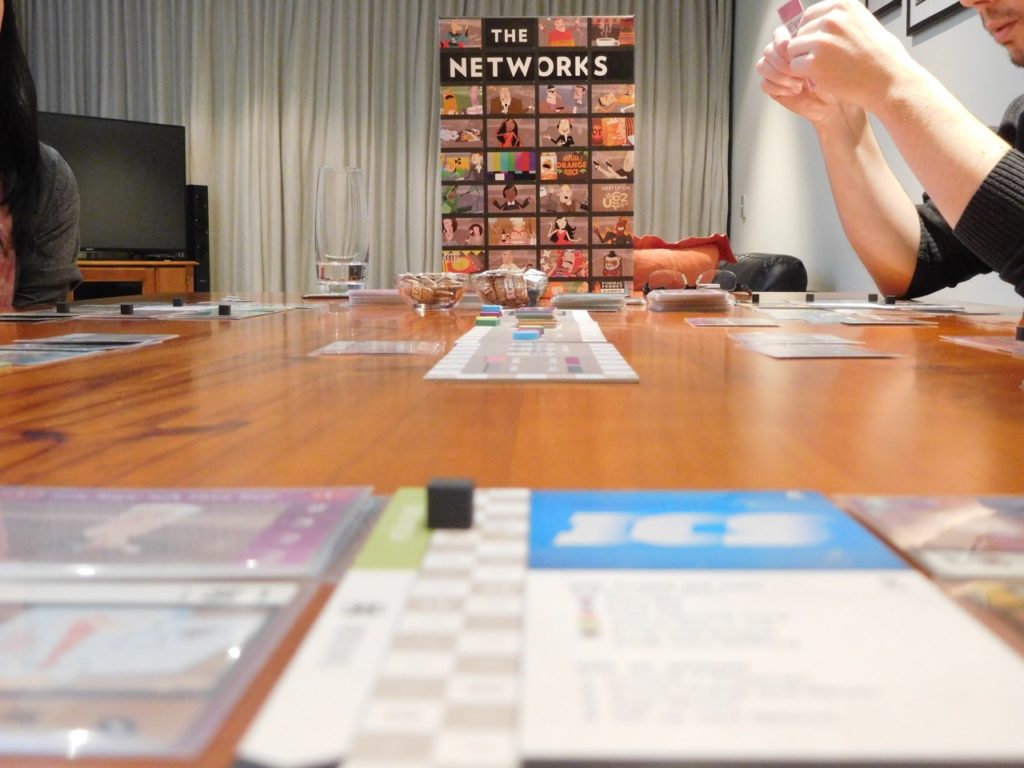 There’s a central score track (number of viewers) and then surrounding that are laid out the various cards that players can take each season (round). These include available Stars to feature in your show, Ads to obtain income, and of course Shows to run. After the first Season a further set of cards also come out – the Network cards, which provide one off or recurring benefits and powers. 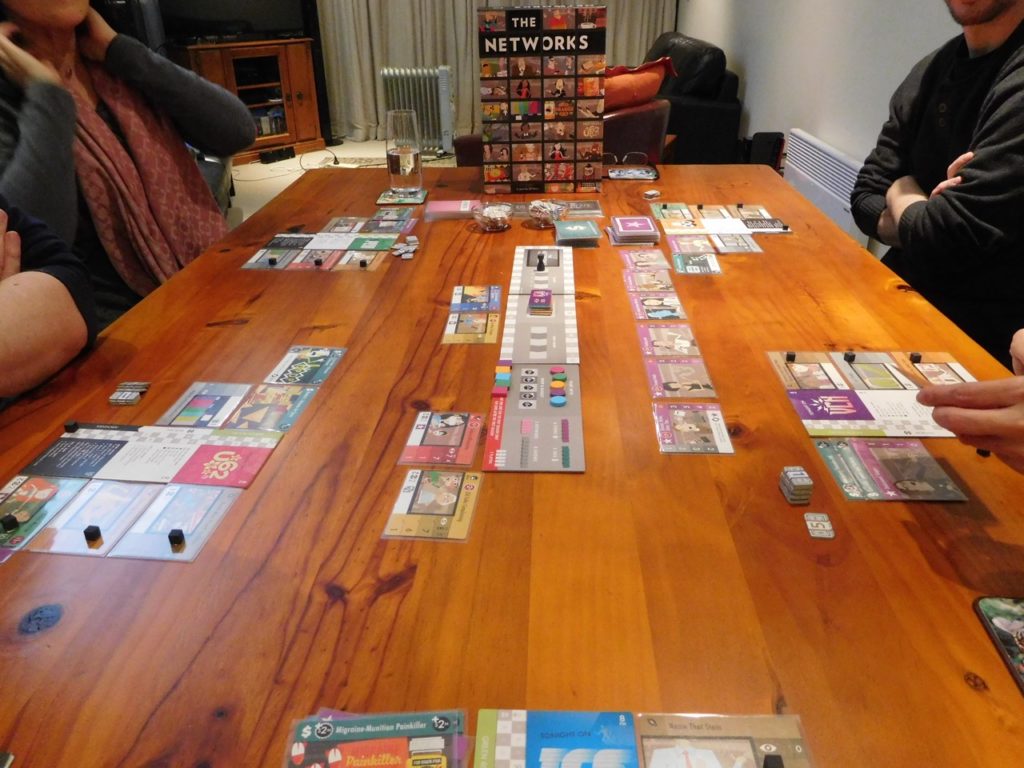 Each player has their own board and play area, around which are arranged the Shows currently being played (on the right hand side) in one of the three evening time slots. These are all starting shows – garnering no viewers by themselves, although if I add Stars to them I would get some viewers. Better to get some more popular shows in though. Over on the top left of my board is my “Green Room” – this is the pool of Stars and Ads I have acquired that are available for me to apply to my shows. However, I have to acquire them into this Green Room first and have them ready for when I buy a show. 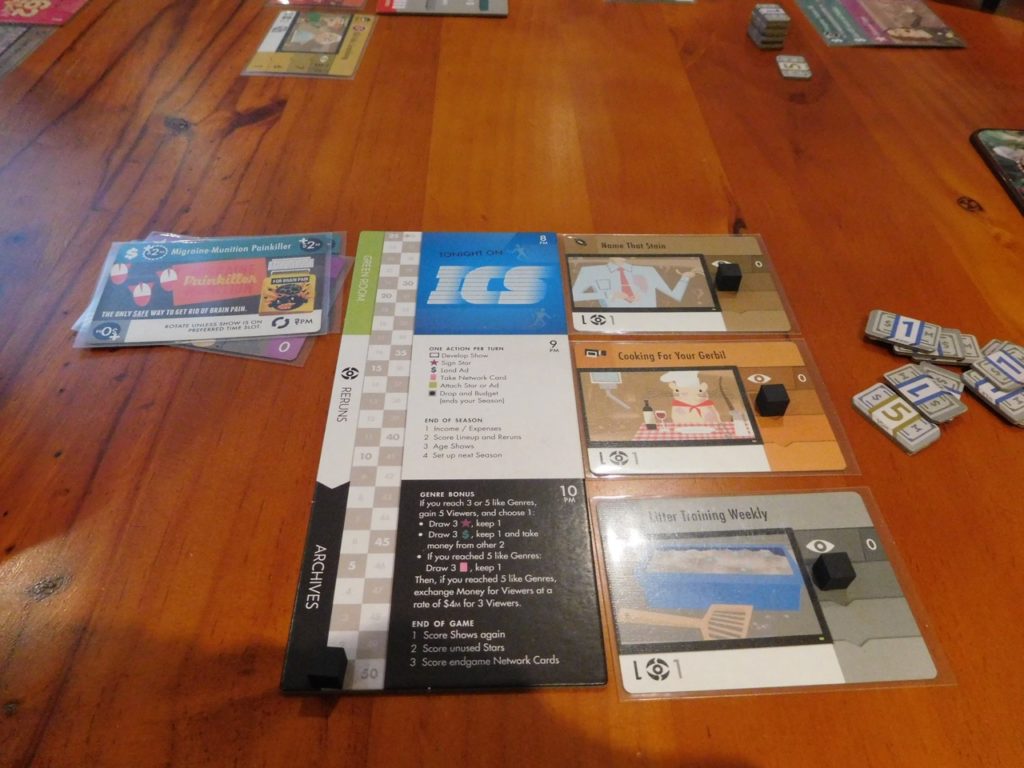 So Nat has managed to acquire the show “Celebrity Rhinoplasty” which cost her $1 million to buy. In order to do so she needed to have a Star available in her Green Room who could appear on the show. Nat had a Star, and that Star’s card is now tucked in underneath the show with the right column of numbers showing. The two columns of numbers jointly indicate how many viewers the show will get by season it is running – in this case the show will get 7 viewers plus one for the Star in the first season it is showing. The black cubes indicate what season the show is currently in, and these cubes are moved down one place at the end of every season. 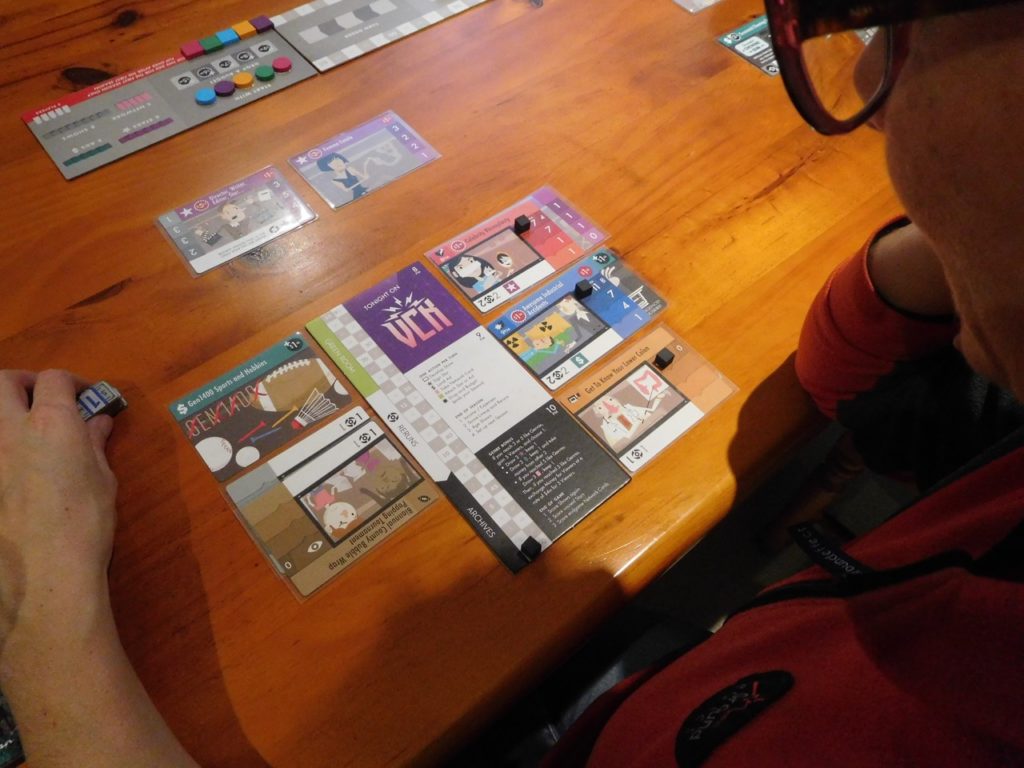 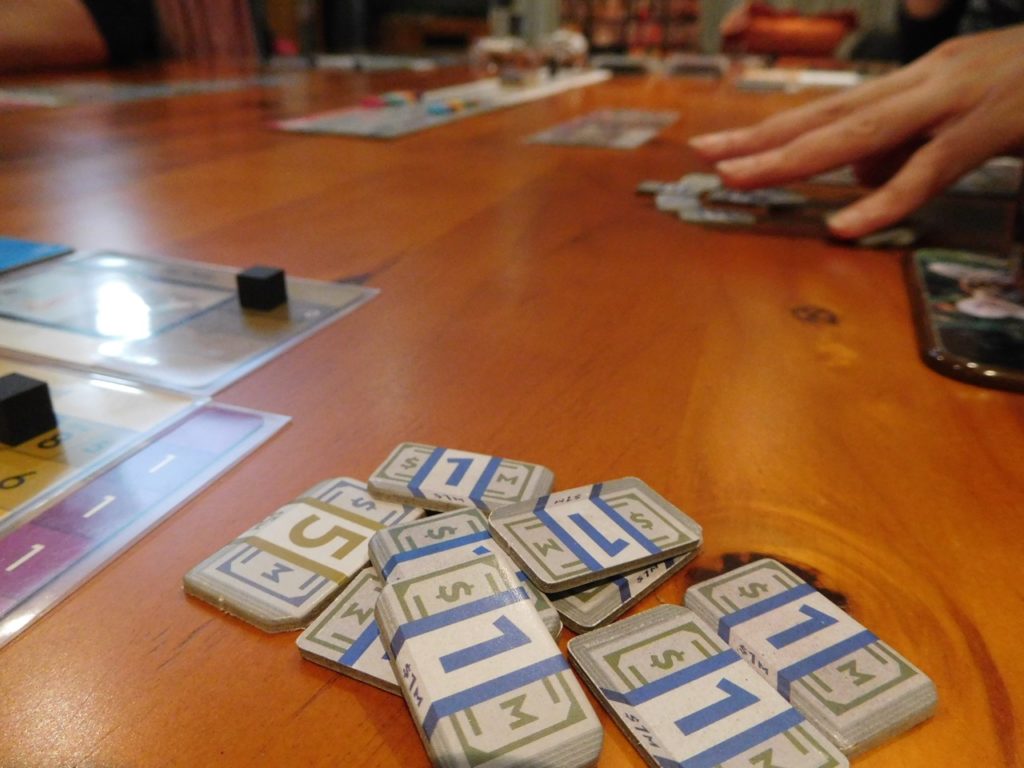 From Season Two, Network cards (in pink) are also introduced to mix things up a little. This is the start of a season with all cards refreshed. Throughout the course of the season players can only choose from what’s out now – only at the end of the season are remaining cards cleared and new ones placed out. 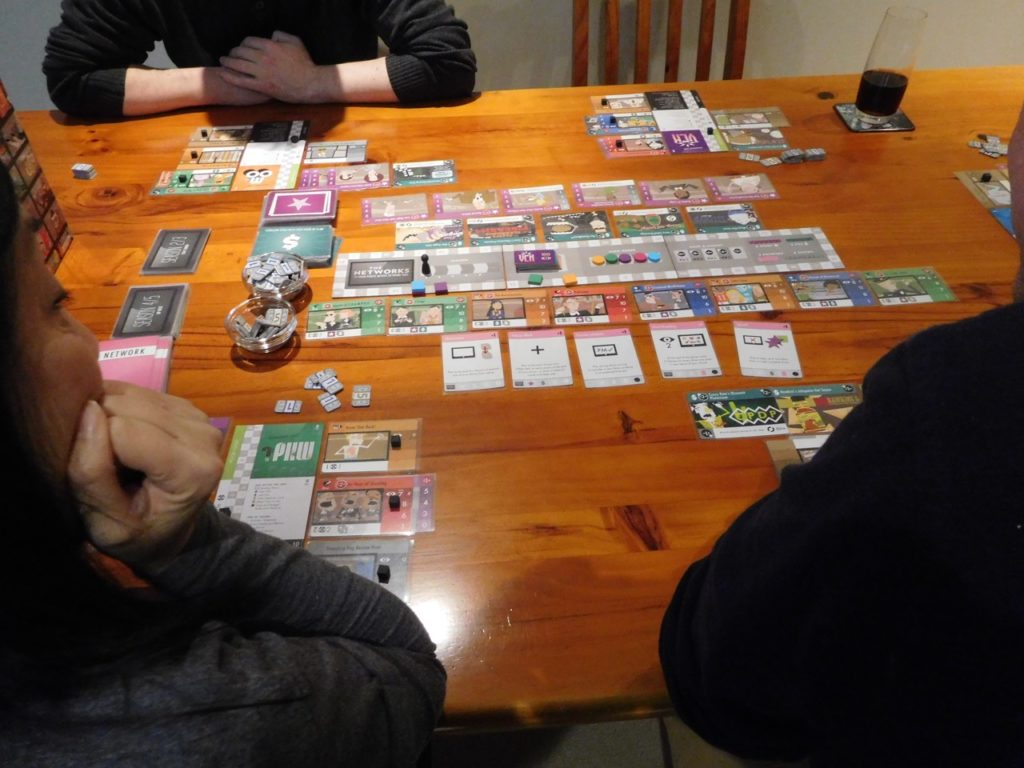 As the seasons progress the Shows, Ads and Stars offered become more lucrative, but sometimes the opportunity cost of replacing existing shows with new ones deters players from upgrading. What to do? 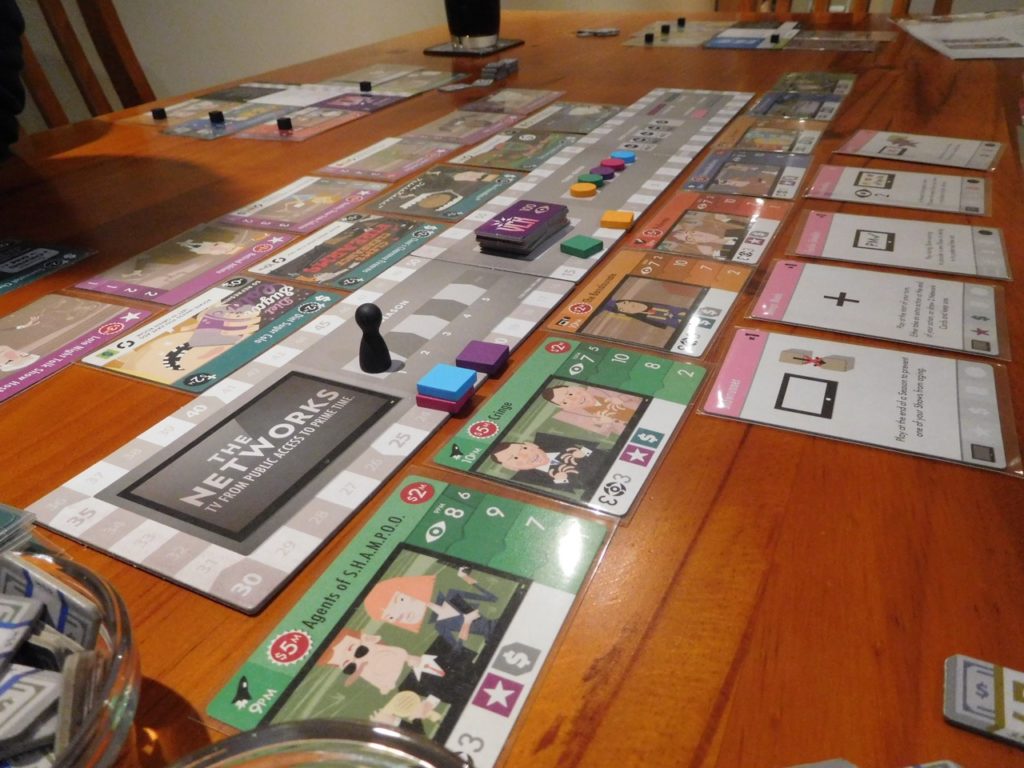 This is near the end of a season with not many options left. Nobody has decided to run the sitcom “How I Left Your Father”. What a shame! 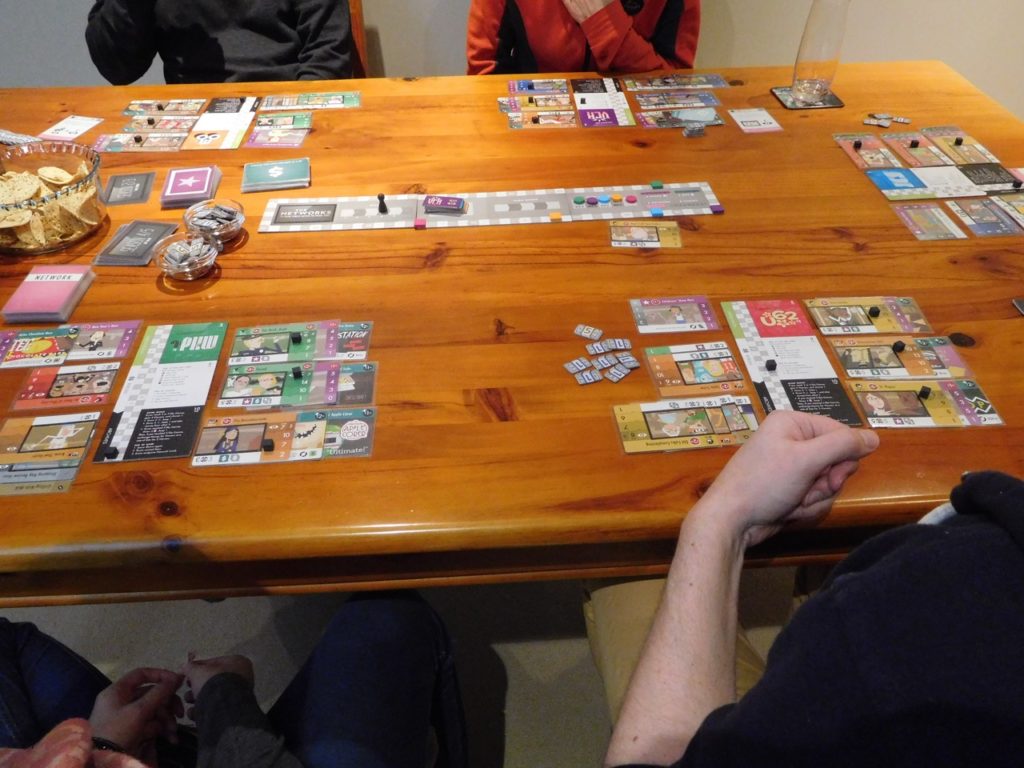 End game board for me and its nice to see the edgy adult cartoon comedy “North Lawn” has picked up a number of new Viewers in its third season as people appreciate it’s cult status. 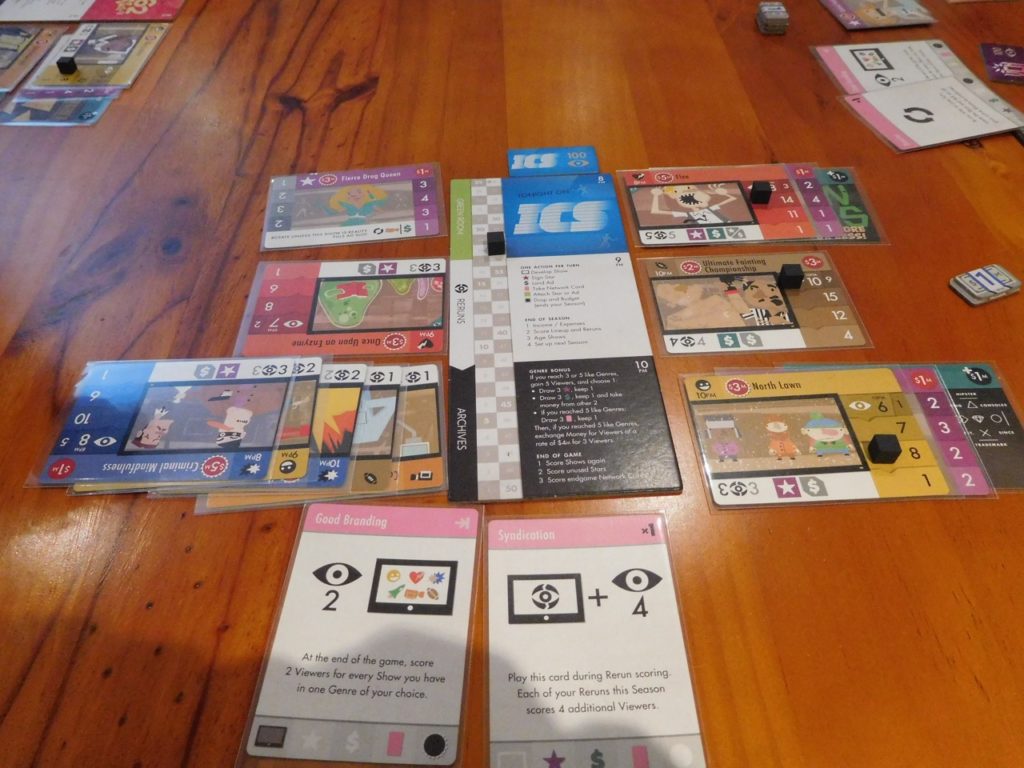 Final end game (with some essential table supplies scattered around) and despite some massive variations in Viewer score through the game, the end scores varied only from 213-243 Viewers. Roughly a 10% maximum variation between winner and loser indicates this a pretty well balanced game, where it doesn’t pay to write anybody off! 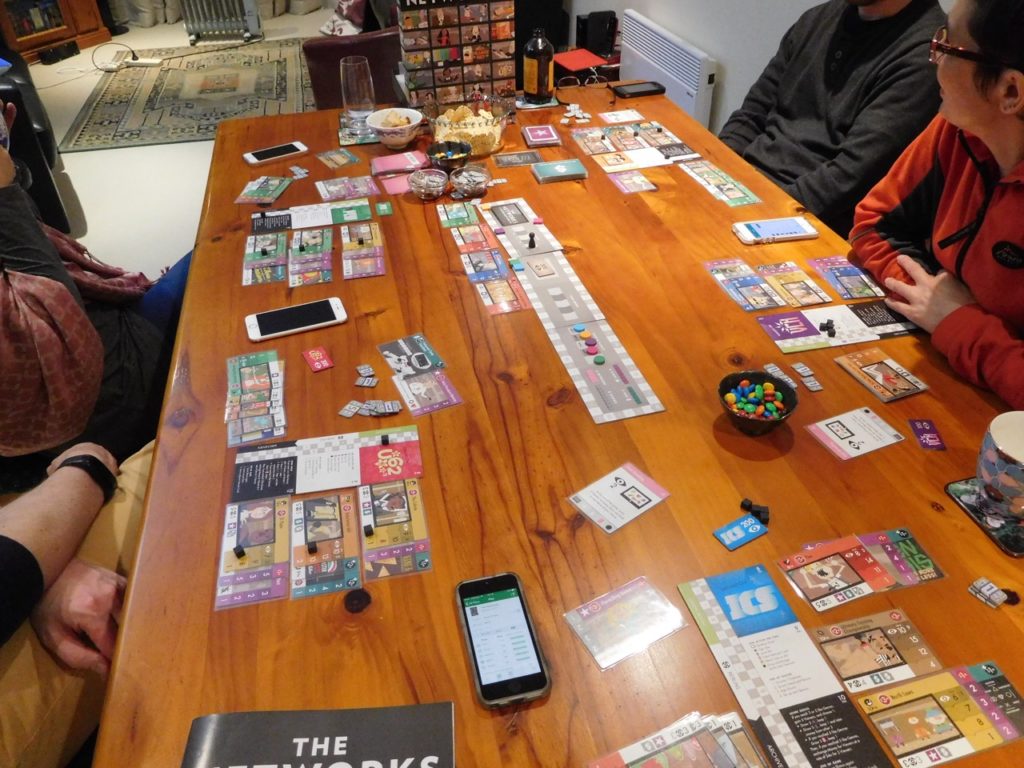