This new game has just made it into our collection after Nat once again came walking up the stairs holding it with a half guilty look and the usual “the shrinkwrap just fell off” excuse … I swear the number of games we have with weak shrink wrap almost defies belief.

Anyway, as big fans of Caverna, we’ve had our eye on this new two person version since it was first announced. It simplifies and streamlines a few mechanics but keeps the depth. There is an emphasis on room building and scoring, with no farm animals to breed and score from. The game is played over eight rounds, with players having an increasing number of actions as rounds progress, reflecting the growth of their dwarven clan. First play took us about an hour but we expect they will go a lot quicker. This one is definitely going to be replayed a lot in our household. 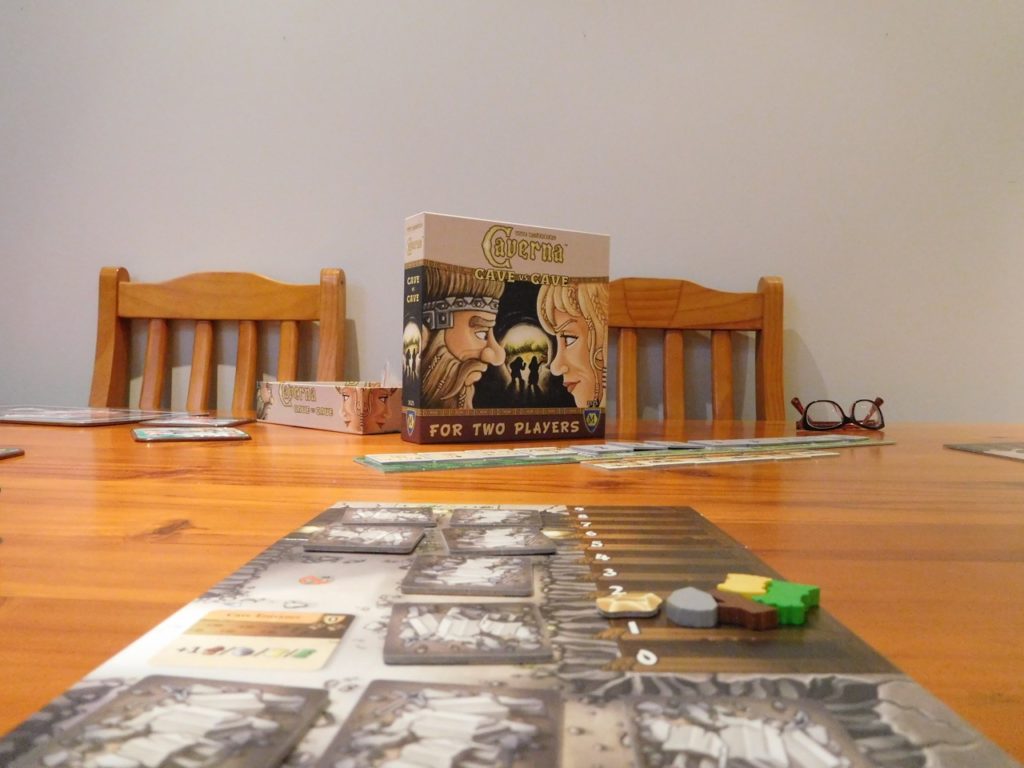 Gratuitous long focus shot of the game box. There is an action track off in the distance, and in the foreground one of the player boards. The player board includes randomly placed, facedown room tiles in each of the un-excavated cave spaces, and a resource track. 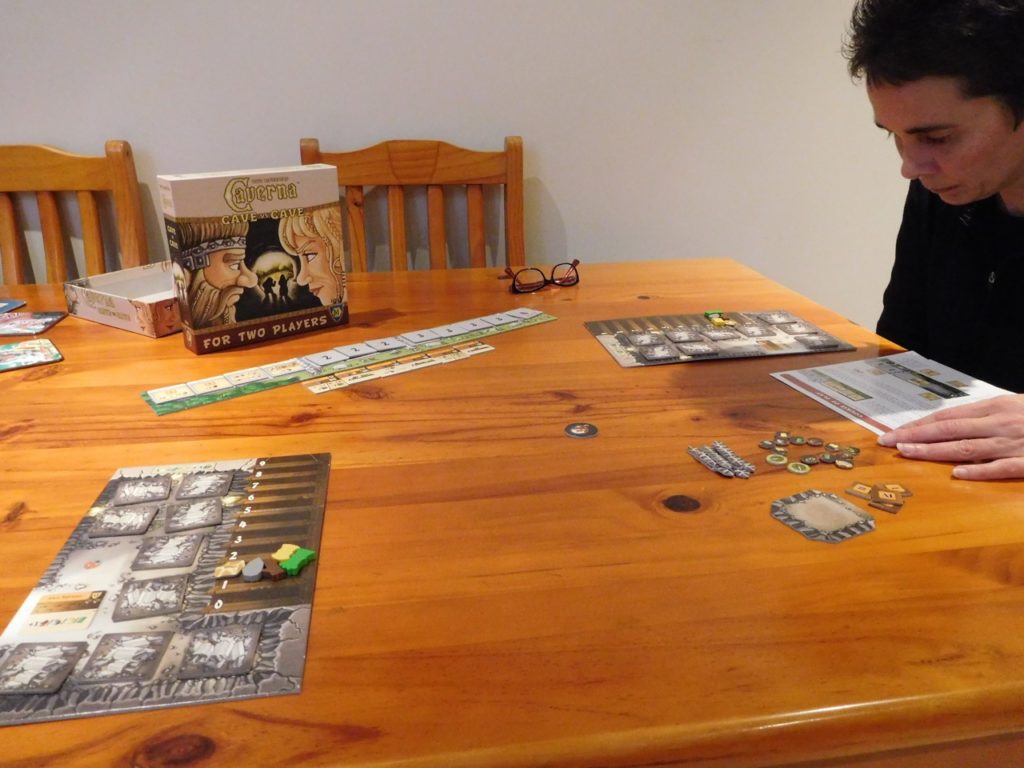 Nat poring over the rules, which were the only let down of this game. The rule book was generally alright except for some of the initial key play concepts that we struggled to get at first. However, we quickly jumped online and watched the first few minutes of a gameplay run through by Rahdo, which immediately clarified the rules. The issue was understanding that players need to use the excavate action in order to reveal a room tile on their own board – that tile then gets placed into the general pool and can be used (furnished) using a separate action. Specific actions are only available when players select particular action tiles on their turn. Actions on furnished rooms are only available when a player selects an action tile with the “Room Action” ability (indicated by an orange square). 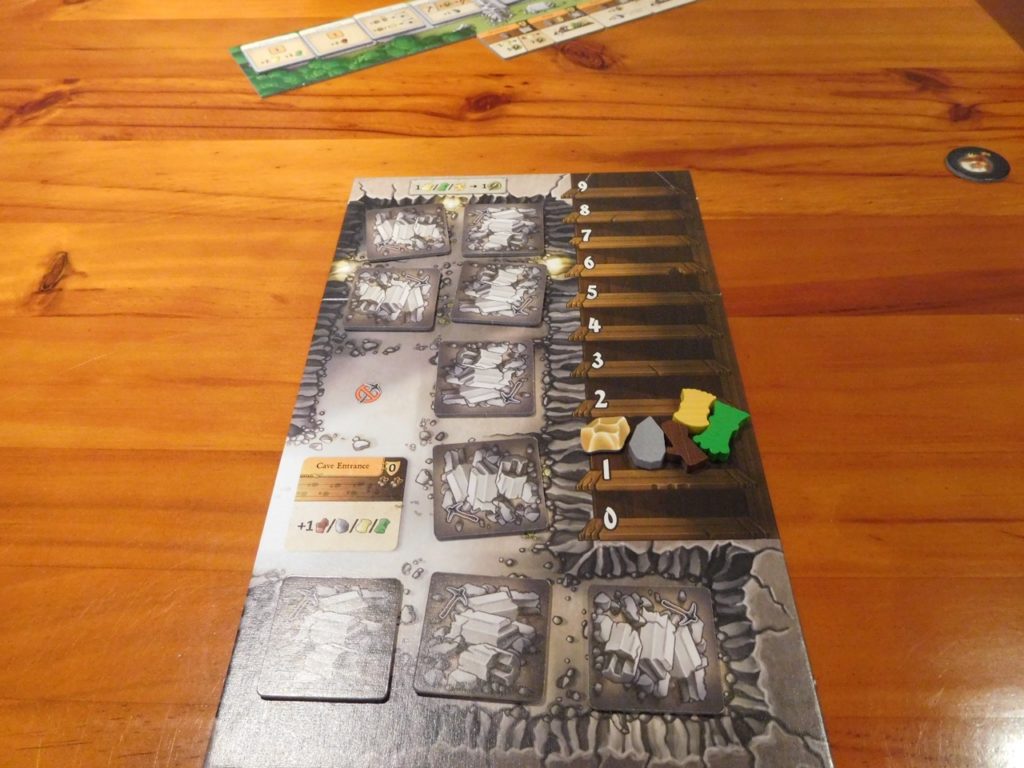 Here is my cave at the start of the game – with a bunch of yet to be revealed rooms requiring excavation – and all resources at one on the track showing I have one each of gold, food, stone, lumber, flax and grain (called “emmer” in this game). 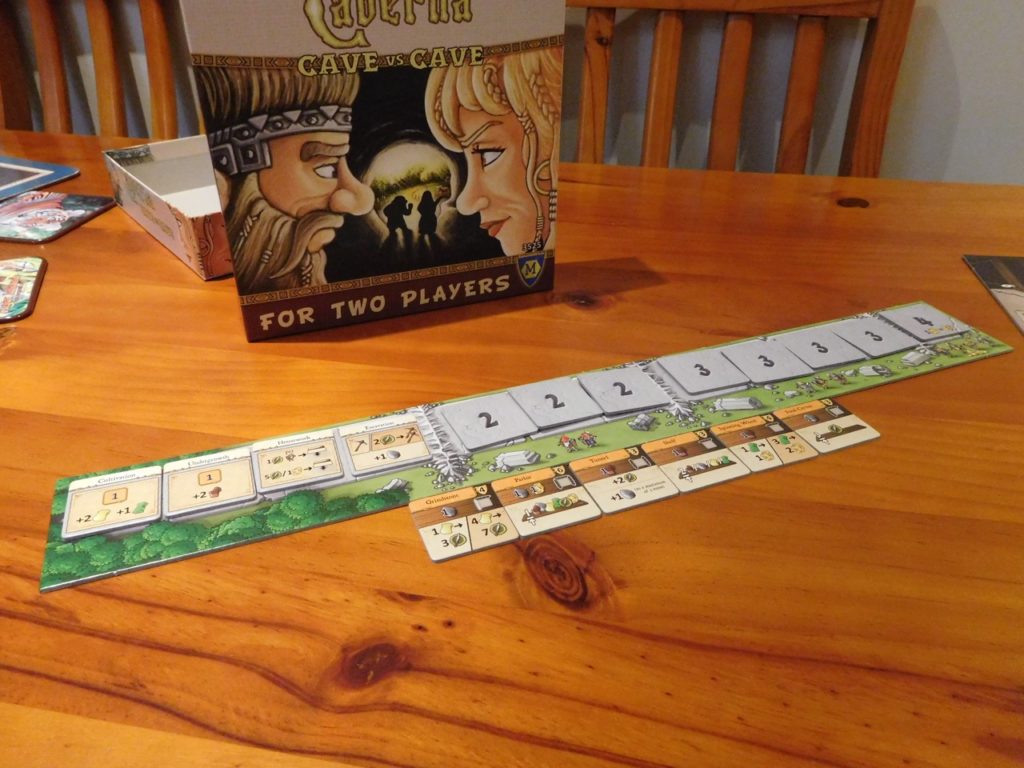 The action track – every round a new action tile is revealed, and available. Players take turns to select and play an action tile – most have multiple actions or benefits. below the action track are the rooms that are available to furnish the caves – the game starts with some base ones and then as players excavate their cavern the revealed rooms are added to the base ones. As an example of how the Room Actions work – the action tile on the extreme left of the board is “Cultivation”. Selecting this tile allows the player to activate the benefits for a single room they have already furnished in their cavern – indicated by the orange square with “1” inside. This tile also allows the player to take two grain and one flax.

The resource track – Caverna veterans will recognise some of these … 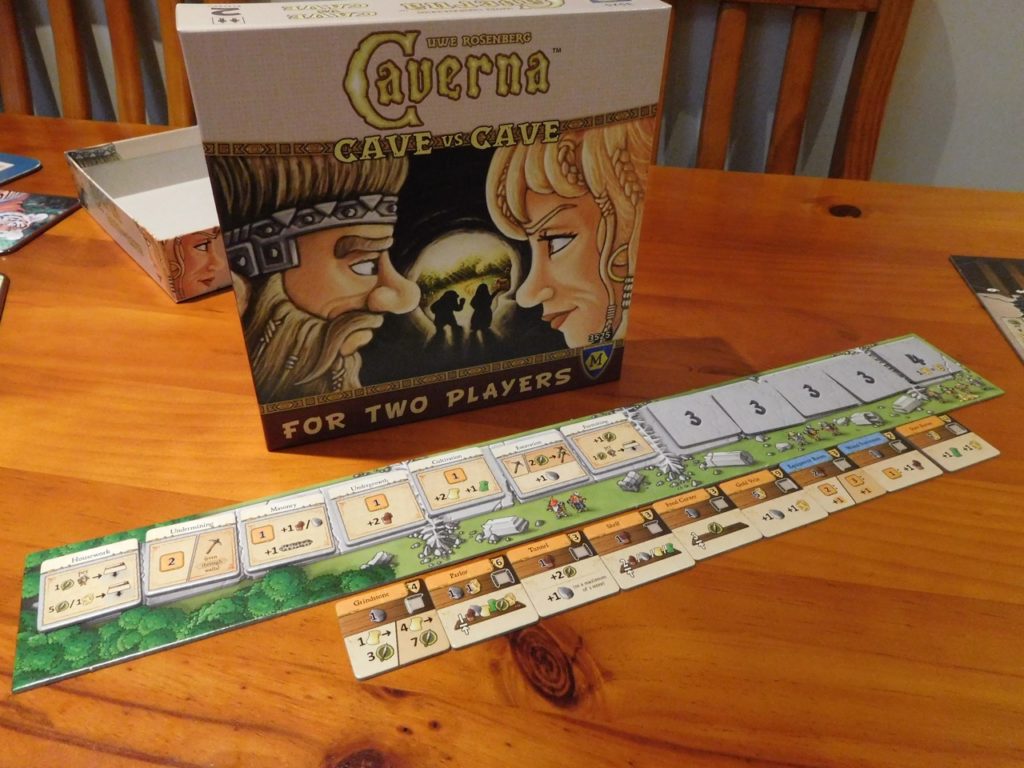 Three turns in – the game begins with four actions already available and three more have since been revealed. We are about to move in to the second phase of the game when each player receives three turns within a round and can therefore select three different action tiles. Tiles are returned to the track at the end of the round, ready for next round. 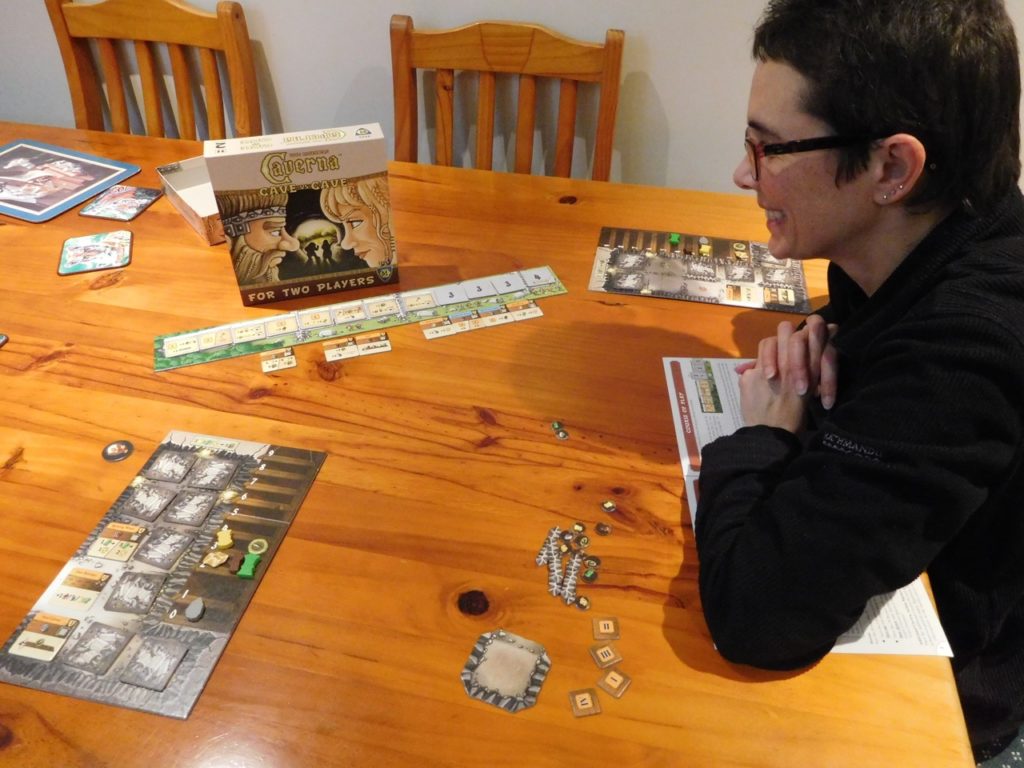 Nat is starting to get the hang of this, and is carefully selecting her next action. 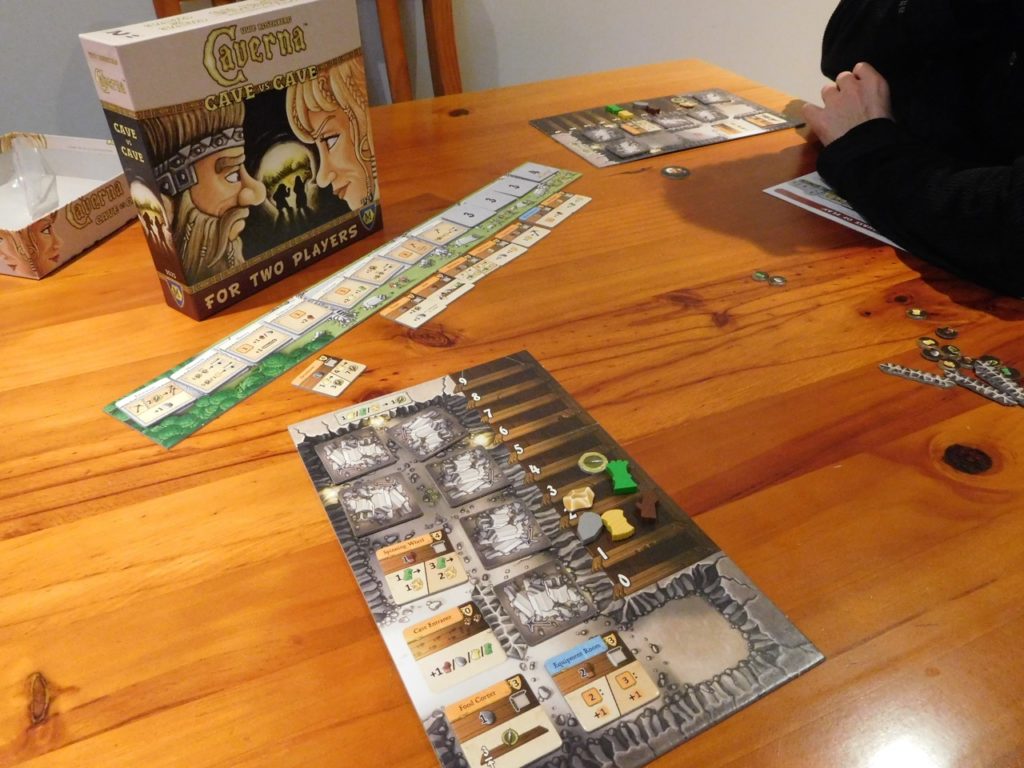 I have now excavated three caverns and furnished three rooms – the cave started with one basic room – the Cave Entrance – and one already excavated space. 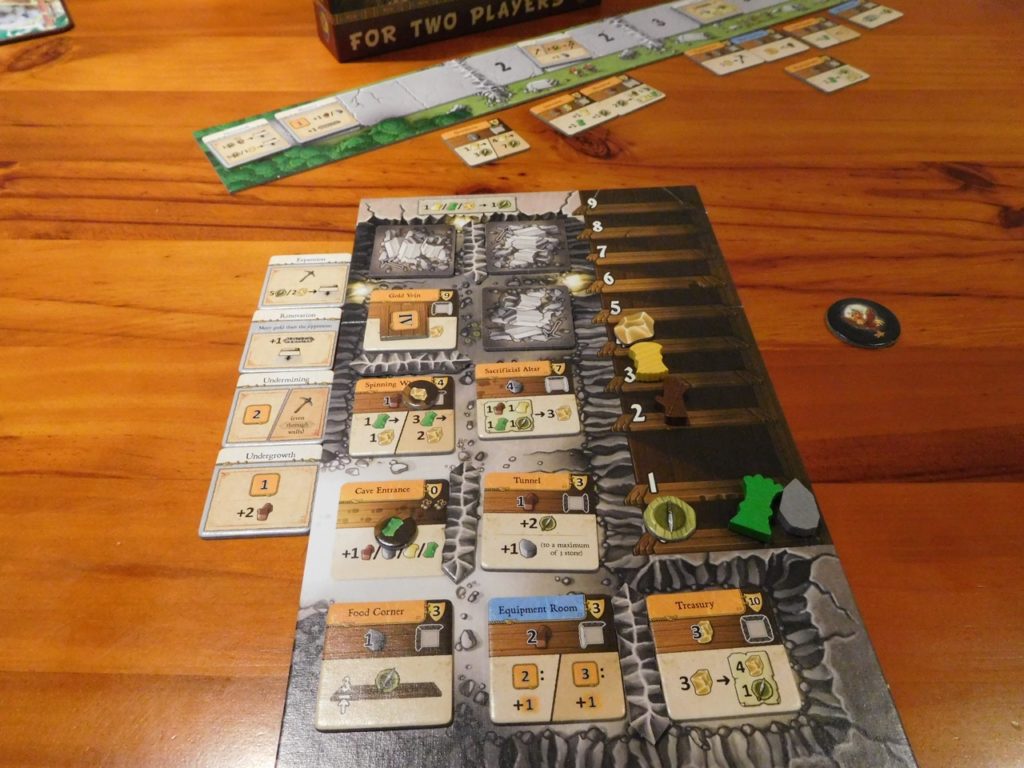 End game cave for me – with seven rooms furnished – players score the victory point values (in the right corner of the card) of the rooms they have built, and add any gold to the points total. This gives me 43 points. 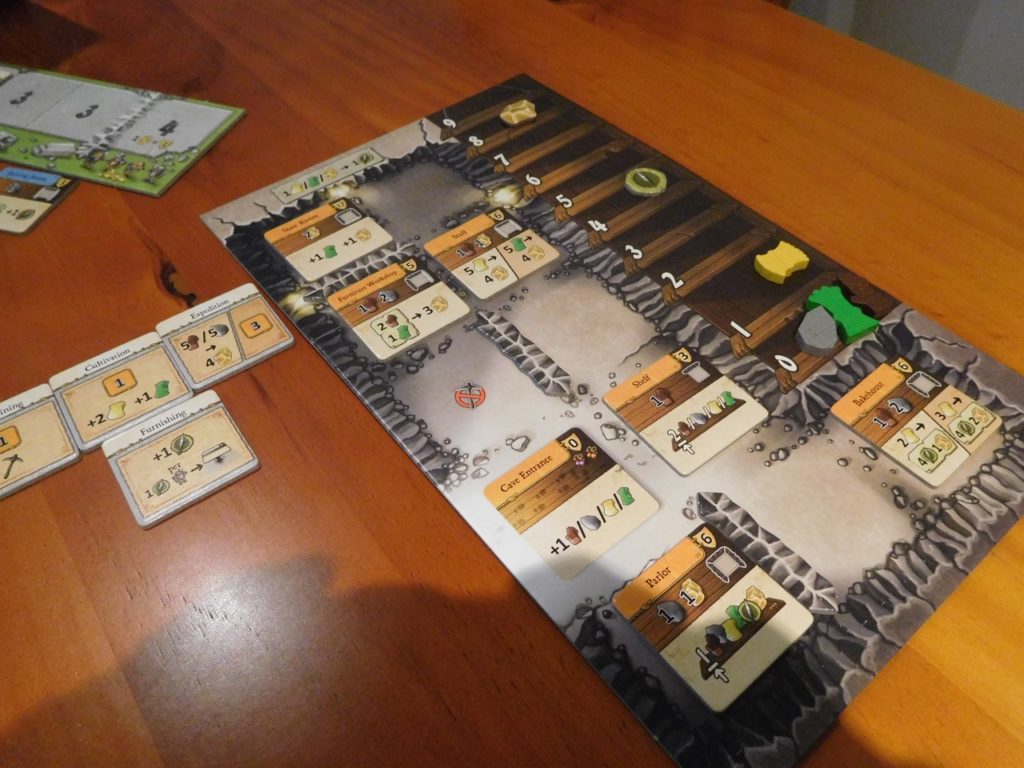 Nat only has six rooms furnished but they are much higher scoring than mine – and she ends with eight points worth of gold too – to give her 46 points and the victory.